In recent years, Vladimir Putin has come under fire for the homophobia in Russian society and politics – but what is life actually like for LGBT people in Russia? Has the media exaggerated the situation or is it more nuanced than we think?

The Nose travelled to Moscow to film a collection of personal vignettes from within the city’s LGBT community. We asked Anton Mukhin, an openly gay stylist, Karina Krasavina, founder of a lesbian party in Moscow and Ira Putilova, a political & LGBT activist who was given asylum in the UK – to share their thoughts and experiences.

By Francis Scarr It’s not something you’d expect to stumble across it in the heartland of industrial, orthodox Russia. But nestled at the summit of Mount Kachkanar in the Central Urals, lies the Shad Tchup Ling, a Buddhist monastery founded in 1995 by Lama Tenzin Dokshit – also known as Mikhail Sannikov. Following his religious… END_OF_DOCUMENT_TOKEN_TO_BE_REPLACED

February 27th 2016, marked exactly a year since Boris Nemtsov, a prominent Russian opposition figure and Deputy Prime Minister under Yeltsin, was shot dead one winter evening on the threshold of the Kremlin. He had become an outspoken critic of Vladimir Putin and at the time was compiling a report on the presence of Russian soldiers in Eastern Ukraine, something that the Kremlin vehemently denied at the time. On February 27th 2015, he walked out of the GUM department store on Red Square with his girlfriend and down onto the Bolshoi Moskvoretsky bridge, overlooking the bright lights and domes of central Moscow. A car drew up alongside the couple and an unknown assailant shot Nemtsov four times in the back, killing him instantly.

His assassination shocked Russian society and was met with widespread international condemnation.

The Kremlin vowed to carry out a thorough investigation. Russian authorities soon charged Anzor Gubashev and Zaur Dadaev, both from the Northern Caucasus, with involvement in the murder. According to Russian authorities, Dadaev confessed to the crime, but apparently later retracted his statement. Three more suspects were arrested, with another, according to Russian media, blowing himself up in Grozny when Russian police surrounded his apartment block.

Since Nemtsov’s death, Muscovites have closely guarded a shrine of flowers and photographs to the politician on the bridge where he was killed. When authorities try to remove it, people only bring more flowers. Yesterday, on the anniversary of his death, thousands of people took to the streets of Moscow to keep his memory alive, marching for two hours and finishing at his final resting place.

The Nose attended the march to find out what Boris Nemtsov means to those marching and what his legacy means today.

The Nose had a chance to talk with Ilya Ponomarev, the only member of the Russian State Duma who voted against the annexation of Crimea in 2014. He now lives in exile in California.

By Francesca Ebel In the baking heat of the Eurasian steppe, a masked man waves a blue flag, a golden damğa emblazoned across it’s front. This is the flag of the Crimean Tatars, a Muslim minority native to the peninsula, who earlier this week – helped by various pro-Ukraine organisations including the nationalist Right Sector… END_OF_DOCUMENT_TOKEN_TO_BE_REPLACED

Santiago de la Presilla travelled to Ukraine to find out about the hidden illness facing many Ukrainian soldiers returning from the front: Post-traumatic Stress Disorder. He interviewed Roman Torgovitsky, founder of the organization Wounded Warrior Ukraine.

In March 2015, The Nose travelled to Sloviansk and other government-controlled areas of east Ukraine to find out what was being done to support those fleeing the fighting. With over 1 million displaced people now living across Ukraine, the humanitarian crisis worsens by the day, despite the fragile ceasefire. We talked to local volunteers, Western NGOs… END_OF_DOCUMENT_TOKEN_TO_BE_REPLACED

As published in The Independent by Francesca Ebel Lyudmila Shabanova says she has been forgotten by her own government. When she and her husband fled the “living hell” of Ukraine’s battle with Russian-backed separatist rebels in the town of Avdiivka, she cursed the rebels and blamed Putin for the destruction of her city. Now in… END_OF_DOCUMENT_TOKEN_TO_BE_REPLACED

Today, Ukraine celebrates its independence day marking the date that it officially separated from the Soviet Union in 1991. In Kyiv, yellow and blue flags fluttered over the capital whilst crowds of people – some adorned in garlands of flowers and traditional embroidery – headed down to the main square, the place where just a few… END_OF_DOCUMENT_TOKEN_TO_BE_REPLACED

The Nose founder Francesca Ebel with an exhibit of our short documentary ‘Forgotten People’, showcased at The Guardian Student Media Awards. 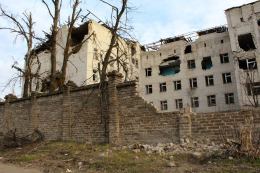 A character from ‘Forgotten People’

A character from ‘Forgotten People’

Behind the scenes of ‘Forgotten People’ 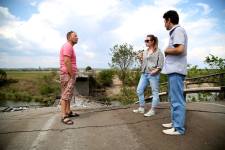 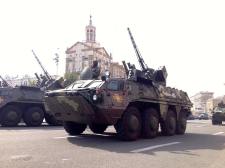 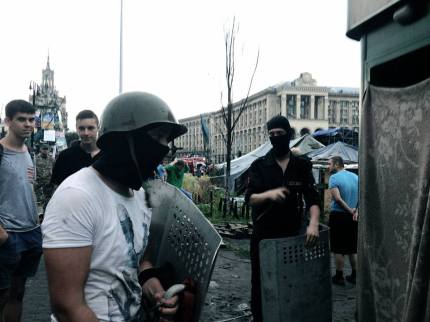 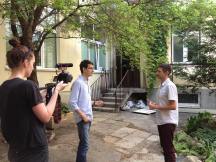 Interviewing a representative from SOS Crimea 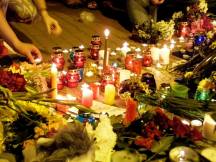